The following introduction maps out the online suite of hazard and severity calculators that are available with this guide as a separate service. The purpose of the calculators and accompanying fuse charts is not to provide complex software calculations of entire electrical networks, but rather to allow the reader to be able to do dynamic risk assessments on a case-by-case basis. The author has had in mind that the person who is responsible for risk assessment is not always in possession of intimate knowledge about the supply network parameters. That is why there is a wide choice of methods available each with a varying degree of input information. The list of calculators is shown below.

On some calculators and tools we have the option to "Download/Print", this button opens up the print interface default to your browser. Below we have listed some of the ways to navigate to the "Download as PDF" options from this print interface where not available by default. It should be noted that Apple devices need to follow a different process which is detailed below.

How to customise the display:   The PDF output allows for the customisation of a few options (On Desktop Devices), the ones of note are "Paper size", "Headers and Footers", and "Background graphics", these can all be found in the "More settings" dropdown arrow section. We advise that you set your "Paper size" to A4, your "Headers and footers" be unchecked, and your "Background graphics" be checked for the best results.

How to "Download as PDF" pages that do not have the button:   This interface that is loaded your default printing environment unique to your operating system and browser, to open this without using a button as a prompt you need to attempt to "Print page", the hotkey for this on windows PC's is "Ctrl + P", for Mac it is "Cmd + P". Mobile browsers do not have a hotkey but you can find the "Print page" option by opening the page settings panel within the browser.

This storage persists over sessions, so if you close your browser you will still be able to export these configuration, it is worth noting that we only store the most recent configuration.

These configurations also allow for the automatic filling of data on the Risk Assessment Form.

After you have exported to excel, the stored configurations will be deleted and you will need to store them once again to export again.

If you have purchased the calculators then you will have access to the online guidebook. It is strongly recommended that you acquaint yourself with the guide at the earliest opportunity. With each calculator, there is an abridged set of instructions which is taken from the guide, mostly from Chapter 14: Hazard and Severity Calculators.

Structure of the Calculator Suite

The following diagram, Figure 14.1 shows where the calculators have originated from. The IEEE 1584 Calculator (No 1) is the primary calculator and is based upon the IEEE 1584 Guide for Performing Arc Flash Hazard Calculations. In the same group and based on the same guide there is a low voltage circuit breaker calculator (No 2), IEC 60928-2 HRC fuse charts (No 3), and a calculator for devices below 125 amperes (No 4). Then in group B there are two calculators based on theoretical papers which are DC incident energy (No 5) and a blast pressure calculator (No 6). In group C there is a calculator based upon the German DGUV -I- 203-5188E Guide to the Selection of Personal Protective Equipment for Electrical Work (No 7). Finally, there are three calculators in group D which provide support in helping to obtain fault current information and also to plot time current curves popular in Europe (Numbers 8, 9 and 10). 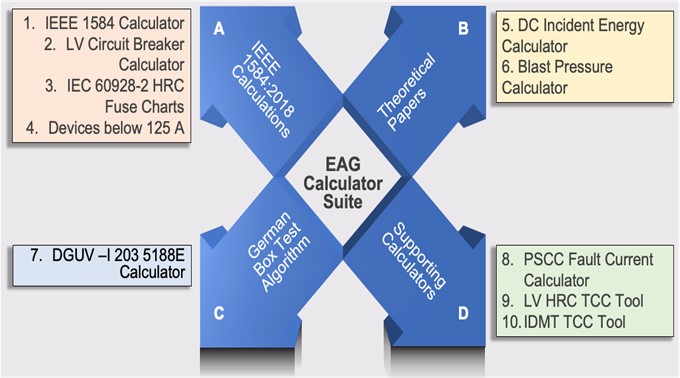 In a generic tiered approach, the above calculators and tools are grouped as tier 1, 2 and 3. In the pyramid diagram shown in Figure 14.2, these groups are listed and at the base are the tier 3 circuits which are the most plentiful in most industrial and commercial facilities. As you can see, the only information that will be required is the type and size of the upstream protection and the minimum prospective short circuit current level. Tier 2 circuits only need actual fault level data and finally, at the top of the pyramid, the actual fault level and a time current curve will be required to return an accurate prediction of arcing current and incident energy. This introduction explains all the tools in detail.

Are the low voltage circuits where the upstream device is known but there is no need for a time current curve. All that will be required is the minimum prospective short circuit current at the equipment to be worked upon. Circuits where the incident energy is below 1.2 cal/cm2 can be quickly determined as well as those circuits where there is a dangerous hazard level. These conditions are given in the protective devices that are listed in the calculators and tools that accompany this guide as a separate service. From experience, you may not know what the actual prospective short circuit current is, but what is usually apparent is what the fault level is not. For instance, if the named range is 2000 amperes and below, a skilled person would be able to determine the likelihood of that being the actual fault level at the equipment. For other instances, there is a prospective short circuit current calculator available.

Are similar to tier 3 circuits insomuch as they are low voltage where the upstream device is known but there is no need for a time current curve. In this case, what will be required is the actual prospective short circuit current at the equipment to be worked upon. This is providing that the fault level does not exceed the capability of the device.

Furthermore, the protective devices are circuit breakers but are not listed in the calculators that accompany tier 3 circuits detailed above. In the tier 2 there is an ACB/MCCB/MCB calculator which will allow you to determine an incident energy level based upon the circuit breaker characteristics. The calculator tool works on the basis of a device instantaneous characteristic and produces an actual incident energy level. From this information our risk assessment process, given previously, can be followed which are: “considering if the risk can be eliminated; and if not, making a judgement on whether further measures to prevent or reduce the risk needs to be introduced”.

Will require details of the time current characteristic curve for the protective device as well as the actual prospective short circuit current at the equipment. The toolbox has an accurate calculator based up IEEE 1584 Guide for Performing Arc Flash Hazard Calculations, to determine the incident energy for circuits up to 15kV. It also incorporates motor fault level contributions if required.

There is also a DC Incident Energy Calculator which will provide incident energy levels in direct current circuits as part of tier 1.

The above calculators will allow you to recognise extreme danger as part of your risk assessment process and the effort is not too onerous in terms of applying the models.

Also included in tier 1 is the DGUV Box Test Algorithm. Although an incident energy level is not possible using this method, the algorithm is used in some European countries to determine PPE levels. In this case, both a maximum and a minimum fault level will be required as well as a time current curve.

The below information is relevant for users who do not have "free trial" access.

Initially, where possible, the default values are 0. In the preset configuration you can see the same display as you would within the calculator, with the exception of the result section looking different.

This configuration will also save the sections that are opened and dropdown values. For the configuration to be saved successfully, the configuration values must be valid. If they are not valid, or there is an error saving, the user will be prompted with an error, if the save functionality is not working and you believe the values to be valid, please contact customer-support with a detailed description.