My preference for the IEEE 1584 method for industrial and commercial applications is given by the final point in the above table, where the DGUV method starts the risk assessment with PPE in mind rather than a last resort. The DGUV method does not give a meaningful severity calculation. To give an analogy: if you wanted to know if your workers require ear protectors, you will measure the sound levels in dB and then try to isolate or reduce if above legal limits. As a last resort you would obtain ear defenders capable of providing the necessary protection/attenuation. The DGUV does not give a severity level such as the onset of a second-degree burn. IEEE 1584 on the other hand, gives a severity level and as it says in the scope: "Recommendations for personal protective equipment (PPE) to mitigate arc-flash hazards are not included in this guide". In other words, you do not have to have PPE in mind when using IEEE 1584, it simply answers the question “who may be harmed and how?”. PPE comes several steps later as a last resort.

DC systems are not included in the IEEE 1584 model although there has been a desire at committee level for many years to include DC testing. There have however, been several technical papers that have been published that have produced theoretical formulae for determining the incident energy levels. These are covered in Chapter 14: Hazard and Severity Calculations and the online tools provided by the European Arc Guide.

The prediction of the arc flash thermal hazards given above do not take into account the possibility of toxic gases, projectiles and molten metals from an arcing event. Arc faults in oil filled equipment has led to the ignition of the insulating medium leading to catastrophic explosions and fires resulting in the loss of life. Whilst these possibilities should always be borne in mind when carrying out risk assessments, it is not possible to calculate severity from the above methods.

Based on the question that I asked earlier, is it the equivalent of a tiger or a domesticated cat inside the panel? The magnitude of incident energy available during an arc flash is directly dependant on the short circuit current flowing through the air gap and the time it takes an upstream protective device to clear the fault. In general, the greater the short circuit current the greater the incident energy, however this is not always the case.

It is a commonly held belief that the greater the available short circuit current is at a given location; the more damage can occur. When it comes to evaluating a protective device’s interrupting and withstand capability, this is a true statement. However, in the case of arc flash, it is quite possible that a lower short circuit current can cause the upstream protective device to take longer to operate and actually increase the overall incident energy exposure.

The time current graph in Figure 4.2 can be used to illustrate this paradox. The horizontal axis of the logarithmic graph represents current in amps and the vertical axis represents time in seconds. The time current curve, also known as the tripping characteristic, defines the relationship between current and tripping time. Time current curves will typically have an inverse characteristic meaning time and current are inversely proportional to each other. The greater the current the less time it takes the device to operate, and the lower the current the longer it takes to operate. 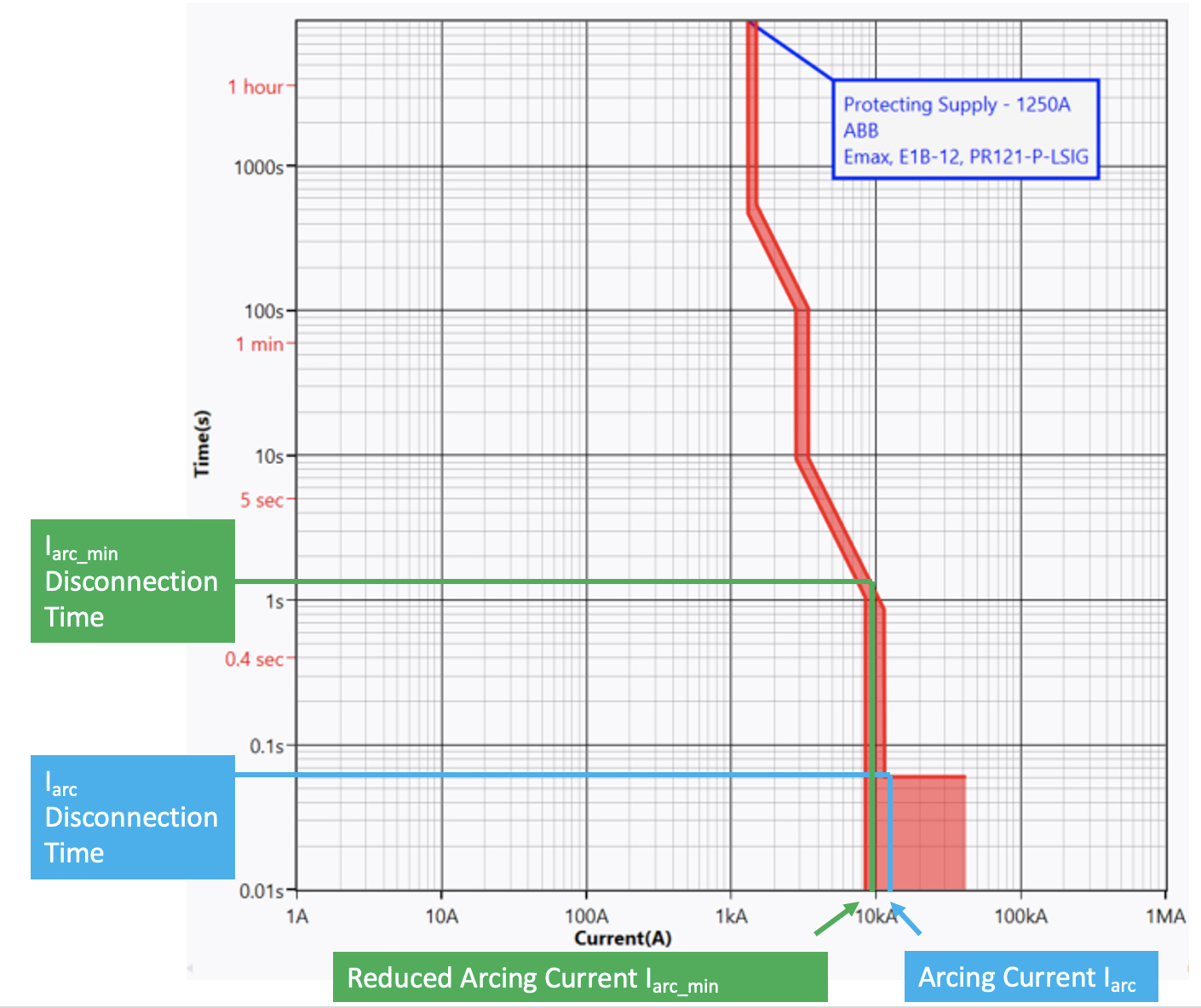 Many protective devices will have an instantaneous trip function defined by a vertical band, as shown on the graph. If the current exceeds this value, it will trip in just a few cycles. However, if the current is less than the instantaneous value, the device will trip with some time delay.

This graph illustrates that if the short circuit current flowing to the arc is 16,000 amps, the protective device will trip instantaneously (0.06 seconds) resulting in incident energy of approximately 2.5 cal/cm2. (Assuming IEEE 1584 VCB electrode configuration, 32mm arc gap and 450mm working distance) If the current drops to 8,000 amps, the device will no longer trip instantaneously, but instead will trip in 2 seconds. Even though the short circuit current is halved, because of the increase in the protective device’s tripping time, the overall incident energy increases to over 40 cal/cm2 which is seriously high in terms of thermal energy. If we were to change the electrode configuration to HCB, then the incident energy would rise to 88 cal/cm2. This paradox shows how important it is that an arc flash calculation study includes various operating scenarios to evaluate the effect that the short circuit current will have on the device clearing time and ultimately on the incident energy

I first used the term fault level paradox in several published articles over 10 years ago to describe how high fault levels could determine that the protection would operate more quickly and reduce the time that it takes to clear an arcing fault. “Wow – who would have thought that I would have been in more danger 460 metres away from the substation than directly outside.” This was a quote from a seasoned distribution engineer when I first revealed the fault level paradox to him. We were looking at incident energy levels for live jointing operations on 400 and 500 ampere, 185mm2 aluminium waveform low voltage feeders. The thought that the incident energy was actually quite low outside the substation was counter intuitive. It was at its highest nearly half a kilometre away.

This might seem blasphemous to a power engineer but at low voltage, fault level can often be your friend when it comes to the rapid disconnection of dangerous arcing faults. When the protection fails to clear the fault quickly it is usually because of impedance. You could say, that for low voltage, it is not the fault level that causes the danger, it is the impedance! Apart from that, the energy let through represented by I2t still holds true. What I have demonstrated so far is that the incident energy depends upon both the current and the time. We must always bear in mind that other destructive consequences of arcing faults, such as ballistic effects, are definitely directly related to the fault level.