A fundamental safety principle is to design out, eliminate or remove the hazard at its source. This leads to the conclusion that the majority of electrical tasks must be carried out with the equipment made dead. To work dead, the electricity supply must be isolated in such a way that it cannot be reconnected or inadvertently become live again for the duration of the work. As a minimum, this will include the positive identification of all possible supply sources, the opening and locking of suitable isolation points preferably by personal padlocks and for proving dead at the point of work. 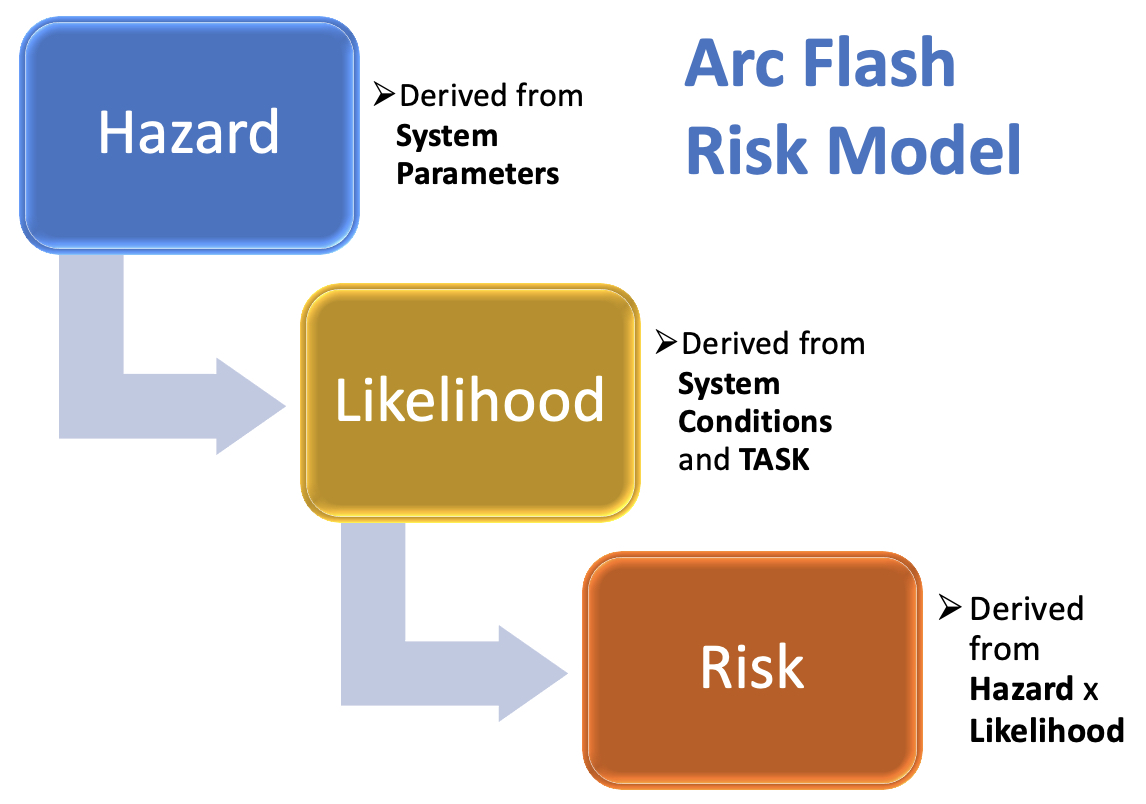 Where the arc flash hazard cannot be eliminated then suitable risk controls should be in place (preventative and/or protective measures). Figure 3.1 illustrates a simplified risk model as applied to arc flash. The hazard ‘arc flash’ which can be further subdivided into several hazardous effects such as thermal, ballistic, noise, and optical.

As demonstrated earlier this is expressed by the parameters of the electrical system. It is the thermal effects that are generally used to provide the potential to cause harm by way of calculations. The input to the calculations is the system parameters such as voltage and prospective short circuit current but equipment specific parameters as well. The protective devices such as fuses and circuit breakers are also classed as system parameters because as will be explored in later chapters, the time to clear the arcing fault is very important in regulating the severity of the hazard.

As mentioned earlier, the risk is the likelihood that this hazard may cause harm. I have therefore found it useful to highlight the likelihood separately in the arc flash risk model.

There was a time when some standards advocated the estimation of the hazard severity and providing personal protective equipment to the level of severity, regardless of likelihood. This would lead to the wearing of heavy-duty PPE to carry out normal routine operations on electrical equipment which was designed and built to an extremely high standard. What was missing were the system conditions and also the nature of the task to be carried out.

The condition of the equipment, the quality of the installation, how well it has been maintained and whether it is being operated in accordance with its original design are all factors to do with the system conditions and therefore will influence the likelihood. Furthermore, the physical task to be carried out on or near energised equipment is a hugely significant factor as it is very often worker activities that initiate a damaging arc flash event. An example of where the task can influence the likelihood is that of excavations or civil works around live cables. I remember a case which was being investigated by the UK Health and Safety Executive in the UK. It involved work within a substation and a new cable was to be drawn into a concrete duct alongside some existing live high voltage cables. Where the cables passed from one room to another, the duct had been made up with cement as a fire and moisture break. The workers proceeded to use a jack hammer to break out the cement and succeeded in penetrating the sheath, armouring and insulation of one of the live cables. The resultant fireball caused severe injury.

Having asked the question about what constitutes live work on many training courses, it is very rare that an example of working around live armoured cables would ever be mentioned. The specific references to live work in the UK (and Irish) regulations highlights work on or near a live conductor (or live part) other than one suitably covered with insulating material so as to prevent danger. Clearly the cables in my example are insulated but not suitably to withstand a power tool such as a jack hammer.

As stated above, the activities associated with the physical task can often lead to the initiation of an arc flash event. For low voltage work the following list describes some activities that have the potential to initiate an arc and some of which have been shown to be common causes of electrical flashover. Whilst some of the following activities are common in industry, practices such as connecting cables into live equipment would be very difficult to justify.