This is another myth which was levelled at me many years ago and seems to persist. What can be a big task is putting right the basic electrical system information that any self-respecting electrical engineer ought to have at his or her fingertips. A precursor to an arc flash study is to have a single line diagram of the electrical system, a short circuit study and a protection coordination study. Appendix A from IEEE 1584 2002 described all the data that would be required in order to undertake an arc flash study. It broke the data down into four separate categories; the diagram, short circuit study, coordination study and the arc flash study. I have represented the data headings into the pie chart shown in Figure 12.1 and as you can see, the amount of effort required for the arc flash study is less than 10%. 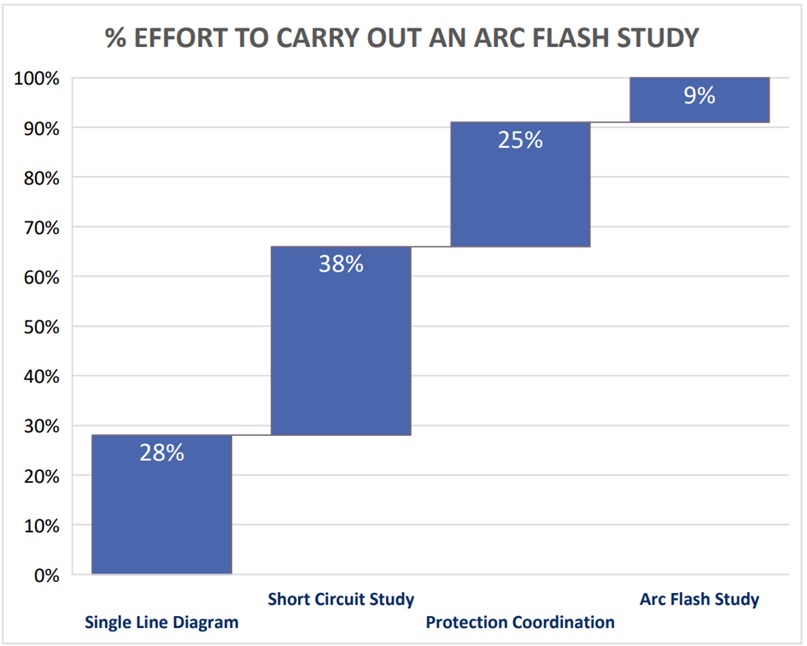 That means that the vast majority of information is what many engineers who have responsibilities for an electrical installation will choose to keep. I would certainly feel uncomfortable as a duty holder if I did not have these records in place.

In 1989, what would be known as the “European Framework Directive” number 89/391/EEC (EU Workplace Health and Safety Directive) was passed which introduced measures to encourage improvements to the safety and health of workers. A cornerstone of this directive is risk assessment which means that any employer must evaluate all the risks to the safety and health of workers. For electrical safety, this means that the arc flash hazard cannot be simply ignored even though there are no prescriptive standards in place, such as in the US and Canada and certainly no direct link from the hazard directly into arc flash PPE.

Directive 89/391/EEC creates an obligation on behalf of the employer to assess the level of risk involved in the workplace and the effectiveness of the precautions in place. For electrical work, all hazards should be considered, including the arc flash hazard and not purely shock, as is often the case with many European companies. Arc flash risk assessment for workers who operate in proximity to or on energized electrical equipment, cables and overhead lines, is an essential part of electrical safety management. Electrical work must be carried out with conductors de-energized and isolated wherever possible and there is a very low tolerance for live working in many European countries.

As a result, many manufacturing plants restrict live working to inspection, diagnostic testing and commissioning purposes. There are, however, many tasks that require working either on, or near to energized equipment. Even then it should also be acknowledged that the process of de-energization often requires exposure to the hazard through interactions such as switching, racking and testing of equipment.

This was somewhat of an urban myth which was perpetuated by the mention in various standards as a threshold for PPE. It has since been debunked and in fact it is possible to purchase PPE of ratings up to 100 cal/cm2 (maximum rating under IEC 61482-2) because it is technically feasible to do so, and the demand is possibly driven by a failure to reduce PPE ratings by technical means. See Chapter 5: Prevention & Minimisation.

Whilst I was undertaking a site survey at a data centre, a pre-qualification document from the main electrical contractor for that site caught my eye. I was told by staff at the data centre that there had not been any recent electrical accidents that had caused injury. But there was a report on page one hundred and something where there had been an injury to one of the electrical contractors’ operatives just a couple of years previously. On investigation, it transpired that an electrician had suffered burns to his hand and arm after he had attempted to plug a three-phase miniature circuit breaker onto a live distribution board in the kitchen area.

It was a stupid thing to do as I am sure that the kitchen distribution board was not exactly classed as an essential service. It is what happened next that concerned me. The electrician had presented himself to the local accident and emergency unit and was treated for burns before being discharged that same afternoon with a bandage over his hand and forearm. He returned to work the following day and was put on “light duties”. He started to feel unwell, so he returned to the hospital and on presenting himself there he was immediately admitted to hospital for an extended stay. It seemed to me that this “minor injury” had become quite serious and speaking to a good friend of mine, who used to manage a large burns unit, sepsis can be a major complication of electrical burns. I looked at the protection to the distribution board and, if an arc flash study had been undertaken, the incident energy may have been marked up as less than 1.2 cal/cm2 at a working distance of 450mm. However, as I have pointed out in Chapter 7: Protection, the hands are often much closer to the arc source and my estimation of the incident energy at hands and forearm was above 13 cal/cm2 which can cause serious burns.