My third example was a high-tech manufacturing plant in mainland Europe. There were several runs of high-power busbar in the facility, each fed with two 400 ampere parallel feeders. Many machines were fed from these busbars via tap off units and the tap offs were routinely changed whilst the busbar was energised. I did some quick calculations and the incident energy at the tap offs was over 40cal/cm2. I noticed that the system was damaged in several places presumably due to being hit by forklift trucks. I was very concerned and asked that energised work be prohibited on this system until further notice. I could not speak the local language and so required a technical translator. I communicated my concerns through the translator to the site electrician. The translator then told me what the electrician had said in reply, which was “does he think that I'm an electrician, or does he think I'm a baker.” I found the reply mildly amusing at first but the serious side to this was that his attitude was probably quite common among some maintenance electricians who thought that they were expected to take risks. Perhaps I could have put him back in touch with the bakery in my first example and he could have followed the profession for which he was clearly more suited.

All three examples of busbar interactions have one thing in common. The staff at the locations knew that they were taking some risk but perhaps needed to understand just how much risk was involved. It would be unbelievable that their managers expected them to take risk, otherwise, why would they have gone to the expense of procuring my services. Sounds a bit melodramatic, but I have been known to ask a risk taker to put themselves in the shoes of their manager who comes to visit them in hospital after they have put the factory out of action. Is it likely, I ask them, that their manager will say “thank you so much for taking that little risk on my behalf!”

An industry that has accounted for a fair share of electrical accidents over the years is quarrying. I was contracted by one such operation where an arc flash injury occurred after a cable had been connected into a low voltage form 4 construction switchboard. Whilst I was not involved with the investigation, I visited the substation and got a good idea of what had happened.

The connection had been carried out successfully whilst the switchboard had been isolated and locked out. The switchboard was then re-energised, and a labourer was asked to clear all the debris from the surrounding area. The cable was of steel wire armoured and XLPE (Crossed-linked Polythene) 4 core construction so there was a good deal of stripped insulation and of course armour wires left on the floor. The labourer picked up the armours first and one steel wire went through the “finger safe” ventilation panel which was protecting the live incoming terminations to the switchboard. The worker was badly burnt in the resulting arc flash and was psychologically affected to the point that he did not return to work even when his physical injuries had healed. 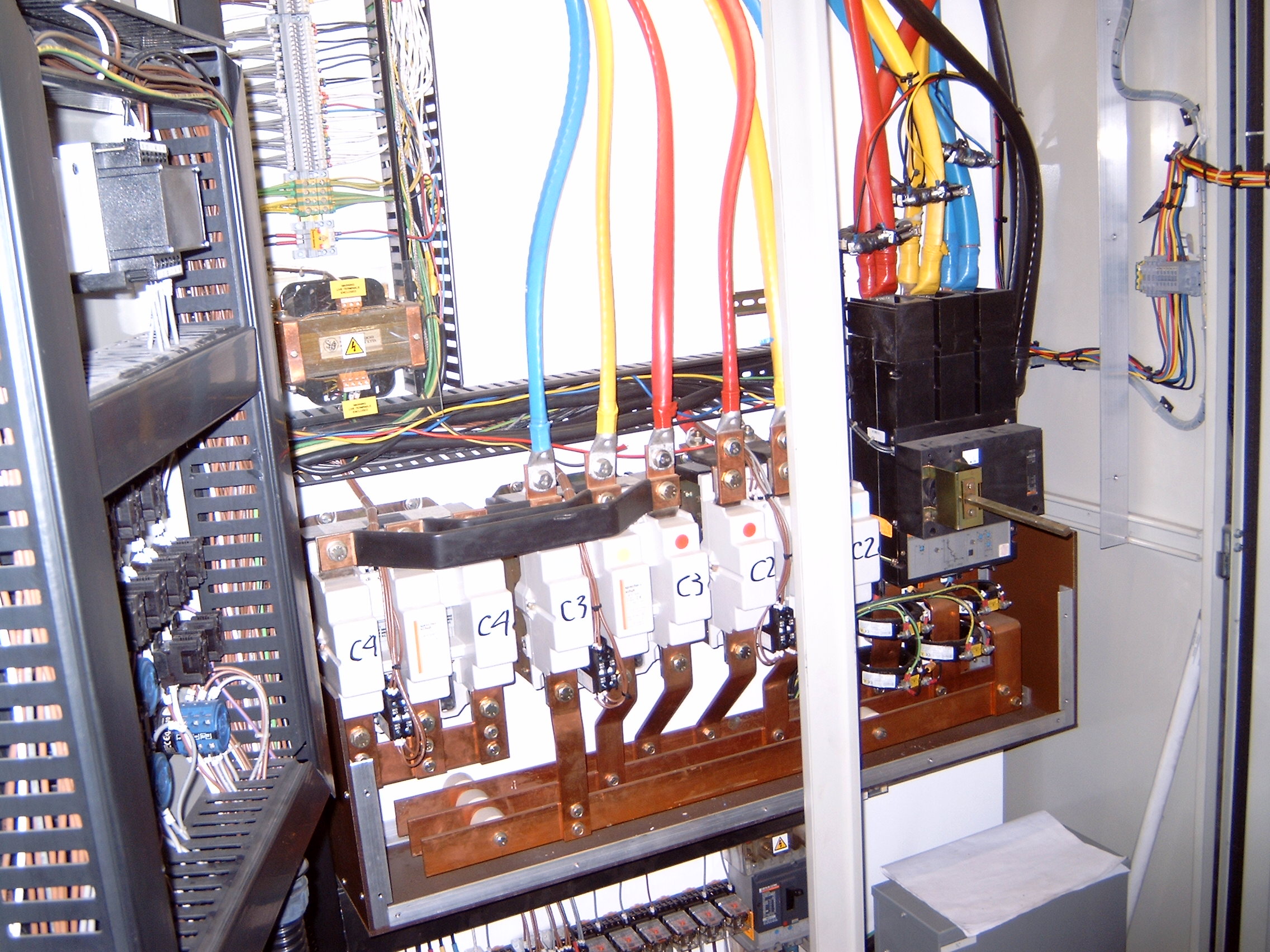 Over my career, I have seen many examples of where screening, phase shields and internal trunking lids had been missing from control panels. These were clearly a result of engineering staff or contractors not replacing them after repairs, inspections, or additions. An example of this was a compressor mains panel where there were bare 800 ampere live bus bars when the panel doors were opened. The panel was obviously shrouded extensively when new, but this had been removed and not replaced See Figure 12.8. On further investigation I found part of the shrouding had been left on top of an adjacent panel, see Figure 12.9. 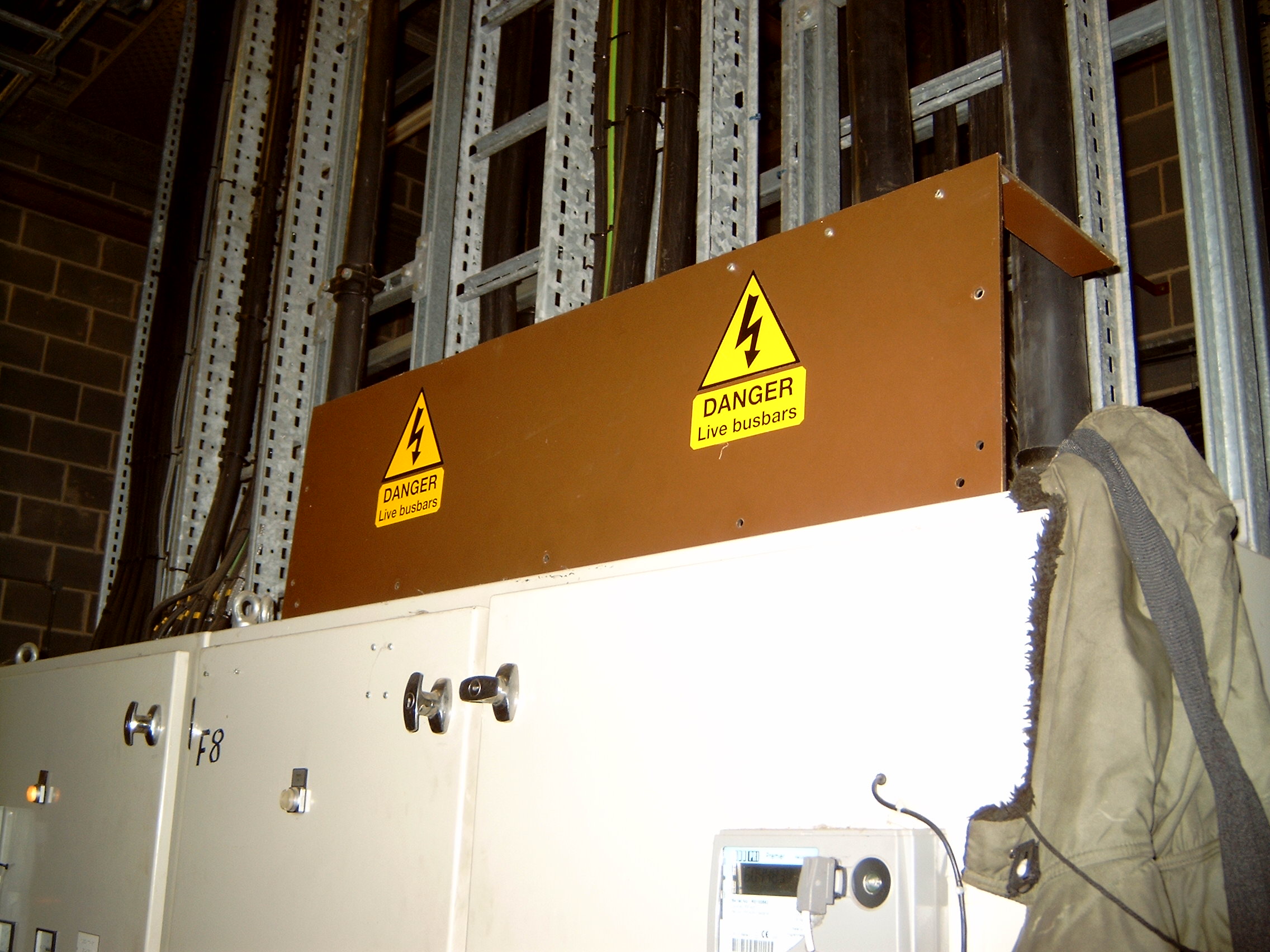 The seriousness of this situation was compounded by the conversation that I had with the young man who was working inside that same panel. He was undertaking some diagnostic testing using a multimeter whilst the busbars were energised. He told me that he worked for a refrigeration contractor who had the contract for the fridge plant at that facility. On further questioning it transpired that he had very little experience and the height of his qualifications was a National Vocational Qualification level two in refrigeration. So, the young man was not electrically qualified and working alone on a high-power low voltage control panel that had vital safety equipment missing. Needless to say, I stopped the work immediately and involved the work’s manager. No doubt some uncomfortable discussions followed.