My role as an electrical safety adviser has involved metaphorically closing stable doors after the horse has bolted on quite a few occasions. By that, I mean that there had been an accident, usually involving electrical flashover that had caused injury and the organisation concerned was being investigated by the Health and Safety Executive. My involvement was to help the organisation to implement safe working practices and rules that should have been in place to prevent the accident. On more than one such occasion, the task which was being performed at the time of the accident, involved connecting cables into energised equipment. What follows are two examples of this practice.

All accidents are regrettable and avoidable, but it is particularly poignant when the injured party is a young person. This is the second time that I have come across an apprentice being hurt in an arc flash incident, the first one I spoke about in my introduction to this guide.

An unsupervised apprentice electrician was connecting a cable into the outgoing way of a miniature circuit breaker distribution panel. Most of the distribution panels were mounted at high level on the factory floor so access was gained using a hydraulic lift. A flashover occurred in the panel which persisted because the upstream protection failed to operate. The apprentice received burns and he also injured his ankle as a result of jumping out of the bucket to escape from the arcing inside the panel. The protection did not operate as it was oversized and had not been maintained. The feeder cable was rated at 200 amperes and the protection was 630 amperes. My understanding is that the event that triggered the arc flash event was never established but one theory suggests that there was a defect within the panel which was disturbed by the exertion of performing the connection task. Perhaps a faulty internal busbar connection or maybe a loose item such as a washer or material could have been responsible. In Figure 12.10 it can be seen what the equipment would have looked like on the left and what it looked like after the arc flash event on the right. The flashover appears to be centred on the vertical busbars which would have been insulated. 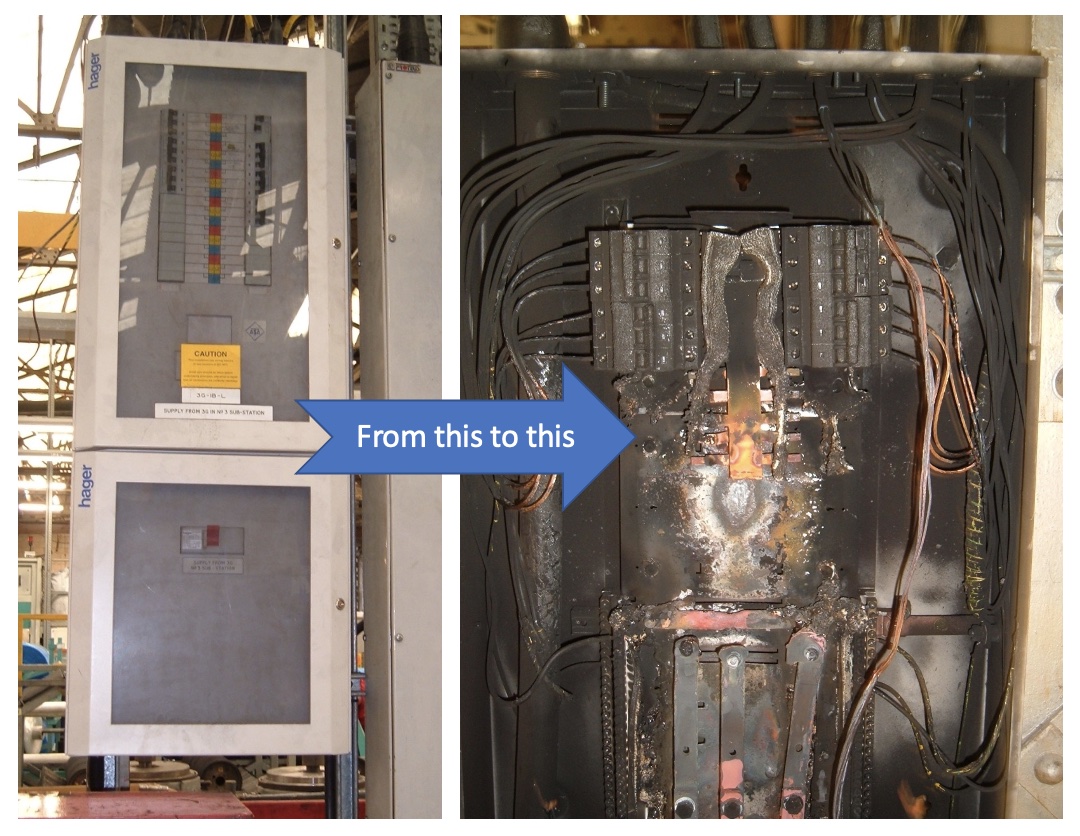 Figure 12.10 MCB Board before and after

This was a classic case of the domino theory of accident causation. The theory stipulates that injuries occur because of a series of factors, one of which is the accident. In the domino theory, all contributory factors are connected and each one of them is dependent on the preceding factor. It visualises all relevant factors as a series of dominoes standing on edge; so that when one falls, the linkage required for a chain reaction is completed. The final domino is personal injury which would not have happened if any of the other dominos had been removed.

My second example of connecting cables into live equipment came about after a contracting electrician was adding a circuit to a form 4 switchboard. Here again, there had been an accident involving electrical flashover that had caused injury and the organisation concerned was being investigated by the Health and Safety Executive. This time the organisation was a major electrical and mechanical contractor whose client base could be described as blue chip. When I was asked to help implement safe working practices, I quickly realised that there was one other element that could be added to the list of losses from the accident and that was BRAND DAMAGE. It was the first time that I had ever really considered injury to brand image, but in the case of this electrical and mechanical contractor it was definitely critical to them. Having been the managing director of a major electrical contractor, I knew that brand is based on image and image is based upon performance. For most blue-chip clients, safety performance is very important and is often the difference between a successful tender prequalification submission and rejection. Had my client been prosecuted, besides being public knowledge, they would have had to declare a failure of a core competence, that of electrical safety, on any prequalification for work. Definitely not good for business.