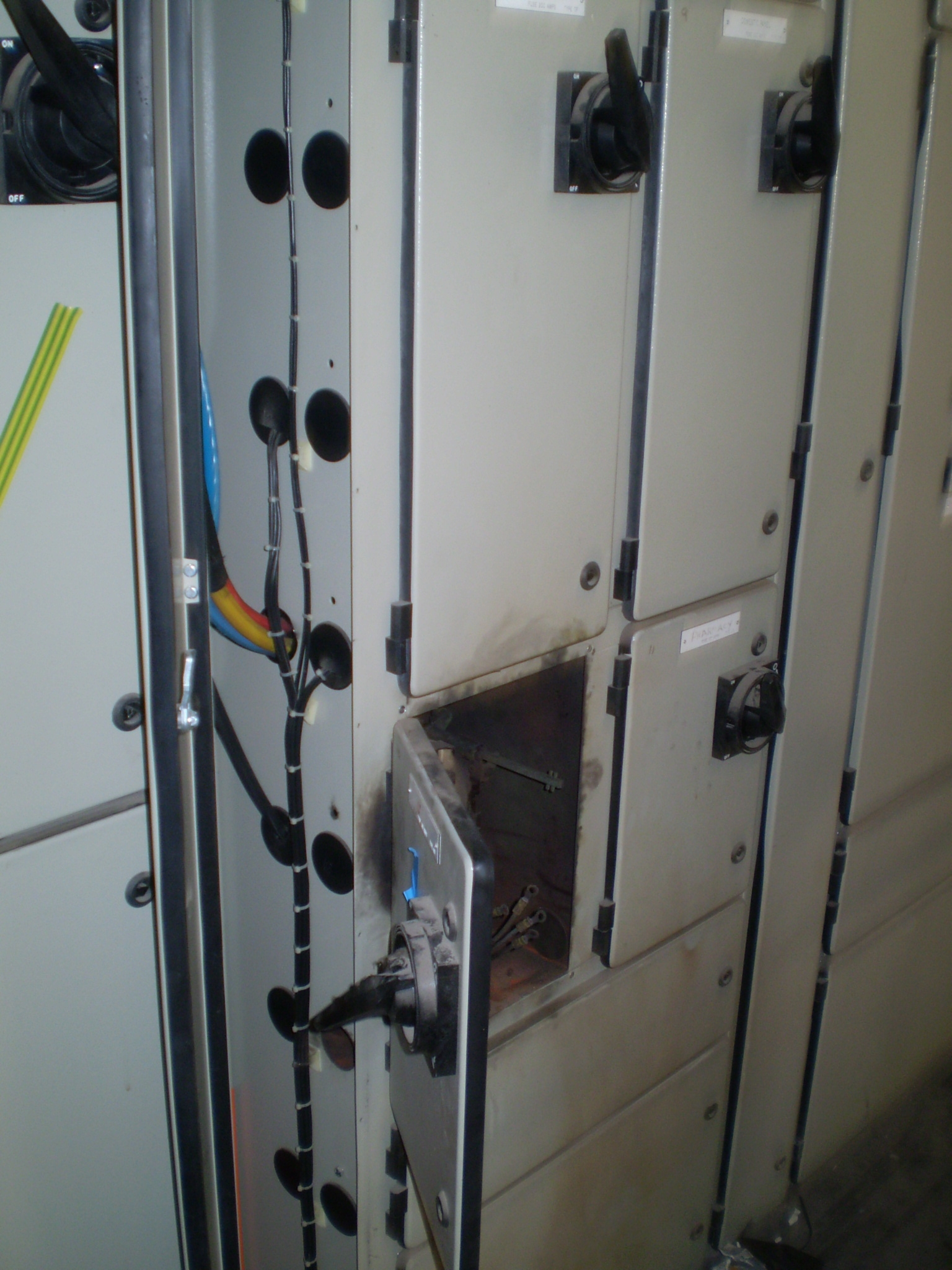 The accident happened late one night at a large supermarket after the store had closed. A cable was to be connected into a switchboard presumably when the power could be isolated. However, the switchboard was not isolated, and the plan was that the cable would be connected into a switch fuse in an individual outgoing compartment, see Figure 12.11. Being form 4 construction, the switch fuse was separated from other functional units and main busbars. The incoming side to the switch fuse was still live and insulated. The electrician was very tired having worked the whole day. Inexplicably, he proceeded to remove the insulating barriers from the live side of the switch fuse (See Figure 12.12) at which he caused a short circuit and was injured in the subsequent arc flash. 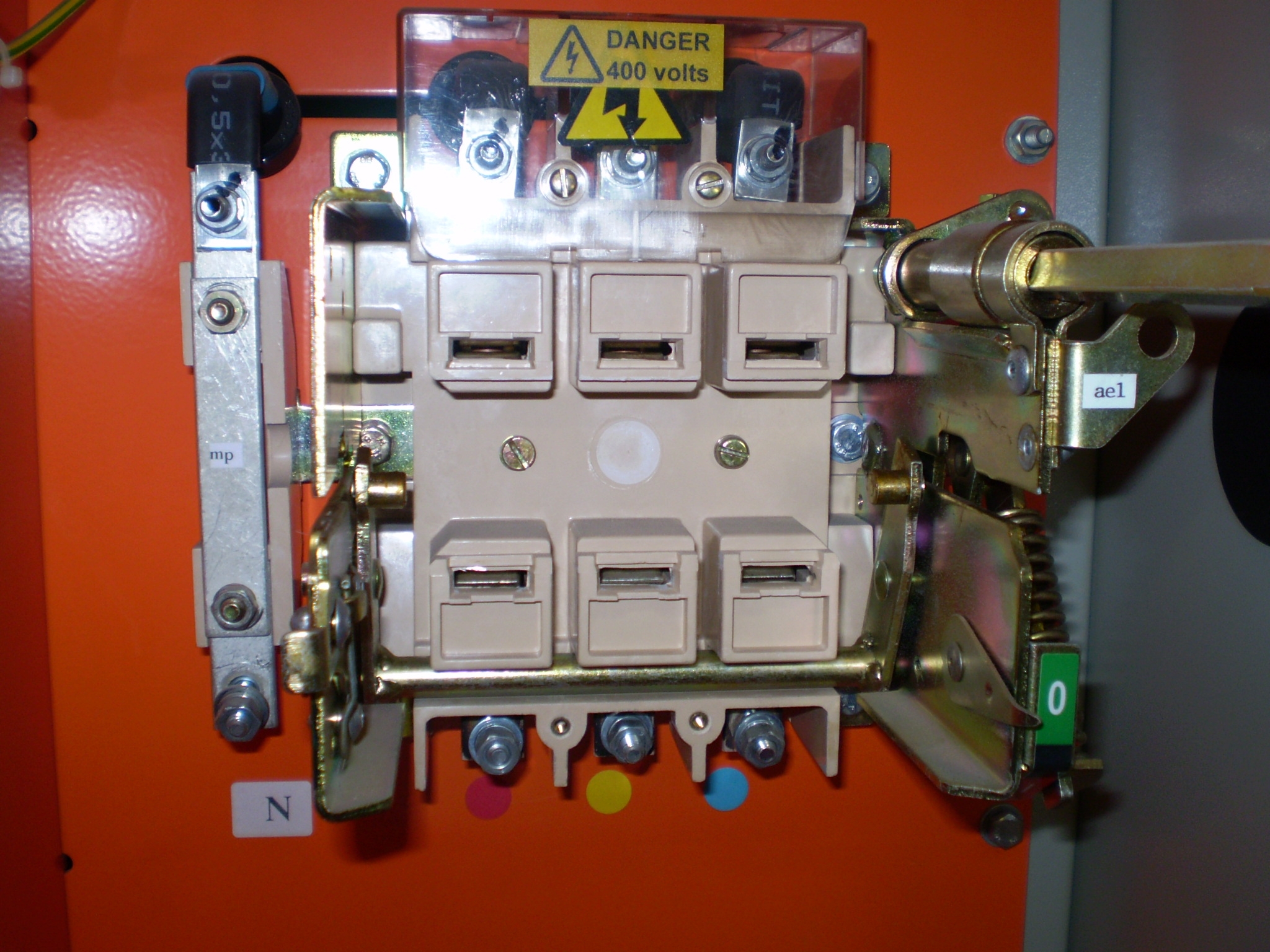 As I said, the electrician must have been very tired at the time and this was probably a contributory factor. Human error contributes to almost all accidents, but it is too easy in circumstances like this to simply dismiss all other possibilities. There are those who would say that it was reasonable to allow the work to proceed given that there was separation of the switch fuse away from all functional units and there was an insulating barrier over the live terminals. Indeed, the UK and Irish regulations for live working states, “No person shall be engaged in any work activity on or so near any live conductor (other than suitably covered with insulating material so as to prevent danger) that danger may arise” etc. However, the words “suitably covered” are dependent upon the task to be performed. Let us look at an extreme example which was an actual accident.

A cable was to be installed into a preformed trench in a substation alongside other cables that were energised at 3.3kV. The other cables were not only fully insulated but were armoured as well. They were encased in cement as they passed from one trench to another, so the idea was to remove the cement to allow the new cable to be pulled in alongside. What was used to perform the task was a jack hammer and you may have guessed by now, the operative punctured one of the adjacent 3.3kV cables. There was a serious explosion and the operative was badly injured. Whilst this could describe other cable strike accidents that occur far too frequently, it illustrates that the words “suitably covered with insulating material so as to prevent danger” are task dependant. Which brings us back to the live switchboard in the Supermarket. The switchboard was form 4 construction, (see Forms of Separation for Low Voltage Switchgear and Control Gear Assemblies to BS EN 61439-2). Some switchboard manufacturers state that form 4 construction is suitable for the connection and disconnection of cables whilst adjacent circuits are live.

However, the BEAMA (British Electrotechnical and Allied Manufacturers’ Association) Guide to Forms of Separation, (See Chapter 4: Prediction) points out that specifying a particular form of separation will not guarantee safe working with adjacent equipment energised for any given form number. The BEAMA guide goes onto to say that this means that where live working is being contemplated, a risk assessment and judgement must be made for every situation by the Duty Holder. In this particular case, the control measures relied entirely on the competence of the electrician and implicitly on the design of the equipment. However, there was not a risk assessment in place and/or formal rules and procedures.

I have come across many organisations that have got it wrong when it comes to PPE. The following is an account of one such situation involving a supplier of construction material and operating a large number of quarries. There was the common mistake of applying a blanket use of PPE with very little evidence of higher order risk controls to prevent the occurrence of arc flash. There was no calculation of incident energy levels or arc flash boundaries which would have given a starting point for the risk assessment process outlined in this guide. Instead, there was a PPE matrix in the company electrical safety policy which had been derived from the local electricity Distribution Network Operator (DNO). A glaring error of interpretation could be seen immediately and that was the belief that the arc flash hazard was much more severe at high voltage than it was at low voltage. In fact, when I did some spot calculations, it became clear that the opposite was true. In addition, the likelihood (and therefore the risk) was less at high voltage than at low voltage. This was because the interactions, switching, with mostly arc protected high voltage equipment were much less likely to lead to injury. This initial modelling indicated that the personal protection for work on high voltage circuits was very much greater than required by quantitative risk assessment and this could have resulted in heat stress to the operatives as well as PPE not being worn.