The open arc test set up uses two stainless steel electrodes at a distance of 30mm to 300mm using a decoupled source giving a prospective short circuit current between 1 kA and 20 kA. The test voltage needs to be sufficient to sustain an electric arc across the electrodes which is typically between 400 V and 700 V. It is the duration of the arc that is used to vary the effective energy on the surface of the specimen to be tested or the protective clothing which can be typically between 200ms and 2000ms.

In the case of PPE, the specimen garments or samples of material are placed around the arc electrodes spaced at 120 degrees at a distance of 300 mm. Calorimeters are placed behind the materials to be tested to measure the energy let through the sample. At the same distance, further calorimeters are placed that are exposed to the electric arcs. These calorimeters directly exposed to the electric arcs measure the actual effective energy to which the garments or sample materials are being subjected. 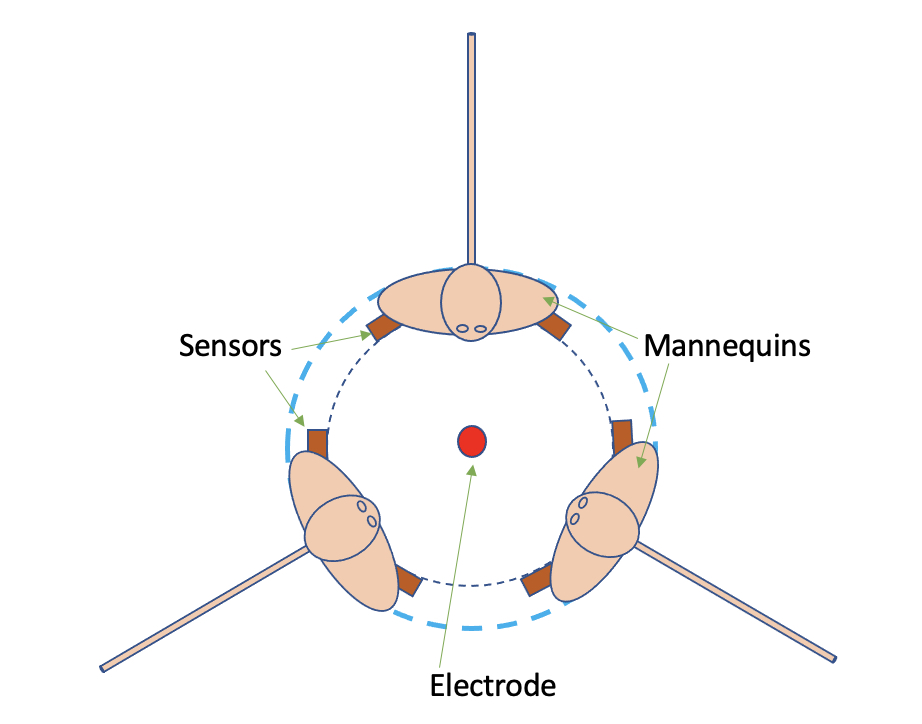 The above diagram shows the mounting of three mannequins at 120 degrees around the central electrode. These could be materials or a mixture of mannequins and materials. The additional calorimeters are placed as shown at a predetermined distance from the arc and the sternum is held centrally to the arc.

The Arc Thermal Performance Value (ATPV), as mentioned previously, is the main output for the open arc testing that is required to match PPE to the site calculated incident energy levels. In order to determine the ATPV, the electric arc current will be 8 kA, the distance between the electrodes 300mm and the distance from the arc 300 mm. A calculation of ATPV is made from the measured calorimetric values of the directly exposed calorimeters and the calorimeters covered by material samples. Tests are performed using different arcing durations to give the resultant variable energy exposure.

I mentioned a value of 1.2 cal/cm2 as a “safer” level and this has been derived from work which was carried out by biophysicist Alice Stoll and Maria Chianta in the 1950s who from their experiments in the US Navy, created the Stoll Curve. They carried out experiments on volunteers by subjecting them to heat on their forearms and recorded the temperature and time at which the individuals responded to the pain. This was performed across a range of radiant heat fluxes, and the burns that developed blisters after 24 hours were recorded as second-degree burns. The Stoll Curve is used with a graph of heat flux against exposure time. The point at which the heat flux cross the Stoll Curve is identified as the point at which a human would feel pain and be at risk of second-degree burns. The ATPV gives the incident energy of a material that results in a 50% probability that sufficient heat transfer through the specimen to cause the onset of second-degree burn injury based on the Stoll Curve. In other words, half the points measured would be above the curve and half below.

Incident Energy Limit (ELIM) is the numerical value of incident energy attributed to a product (material or equipment), below which the values of all product responses are below the Stoll curve and without breakopen. Put simply, the ELIM differs from the ATPV in that there is 0% chance of a second-degree burn rather than a 50% probability. Where this is applied to a garment, I understand that this additional safety factor will usually result in a derating of about 10%. It is sometimes regarded as a purely academic measure. This is because the ATPV would have to be exactly equal to the actual arc flash to create the conditions of a 50% chance of a minor burn. In my practical experience of thousands of arc flash calculations in the field, I cannot recall a single occasion when these conditions have existed. If used as part of a risk assessment, it will be usually an additional safety factor on top of how the incident energy calculations are applied.

Breakopen Threshold Energy (EBT) is the numerical value of incident energy attributed to product (material or equipment) that describes its breakopen properties when exposed to heat energy generated by an electric open arc test. It represents the highest incident energy exposure value on a fabric where the garments do not exhibit breakopen and is the value of incident energy at which breakopen occurs with 50% probability. A breakopen is defined as a minimum of a 1.6 cm2 hole formation. Various fibre types act in different ways but each one can breakopen before the burn prediction level is reached. Workers are assumed safe if the arc rating of their clothing (or ATPV value) exceeds the electric arc incident energy as calculated in the worst-case scenario of a risk assessment.

PPE tested to the open arc method can be linked directly to quantitative risk assessments on site and calculations through the IEEE 1584 Guide for Performing Arc Flash Calculations. The calculations will provide incident energy and an arc flash boundary and, although discussed elsewhere in this guide, some additional care is required due to the interpretation of the outputs from the open arc test according to IEC 61482-1-1.

Exposure to heat flux of 1.2 cal/cm2 for the duration of 1 second, i.e., exposure to incident energy of 1.2 cal/cm2, can produce the onset of second-degree burn or partial thickness burn of the bare skin. Limiting the incident energy exposure at the skin surface to no more than 1.2cal/cm2 means that you can still receive some burn injury, however the primary objective of arc flash protection has been to minimise the injury and probability of death. In general, if the prospective incident energy exposure at a given location is below 1.2cal/cm2, no additional thermal protection is required for the worker. This is achieved by the determination of a boundary beyond which the incident energy is less than 1.2cal/cm2, or through shielding or application of properly designed specialist PPE capable of withstanding the thermal effects of the arc. Where protection against the thermal effects becomes necessary it must be emphasised that PPE does not prevent the accident happening in the first place.