Personal Protective Equipment (PPE) used for arc flash protection includes garments made from FR fabric. When tested to the open arc test IEC 61482-1-1, the fabric is designed to provide a thermal barrier and limit the incident energy exposure at the skin surface to no greater than 1.2 cal/cm2 . Although FR fabric may burn when exposed to a flame, it is designed to stop burning when the flame is removed. It also must not break or burn open and expose the skin directly to the flame. As discussed previously, the ATPV represents the incident thermal energy that results in a 50% probability that sufficient heat transfer through the clothing is predicted to cause the onset of a second-degree burn injury, or - more colloquially - the ATPV is the incident thermal energy that the clothing can support before the wearer would suffer second-degree burns.

As described above, when carrying out open arc testing according to IEC 61482-1-1, an ELIM is obtained which similar to the ATPV in that it is derived by statistical means from the test data but is slightly more conservative. Whereas the ATPV is based on the 50% probability of crossing the Stoll curve, the ELIM is based on no points crossing the Stoll curve. The reason that the ELIM was introduced was because of disagreement in Europe over the concept of a 50% chance of a burn, albeit a minor one. This was based upon the European PPE Directive. So, the ELIM was introduced which made sure that there would be a zero chance of a burn where the ELIM rating of the garment is greater than the prospective incident energy level. An advantage of using ELIM instead of ATPV is that the prescribing of specific undergarments is less of an issue. See the earlier section on undergarments. In other words, if properly prescribed, there is zero probability of the ignition of garments worn beneath ELIM rated PPE.

It might be worth pointing out that having spoken with various people in the industry, the ATPV model is valid and there are no injuries reported where the ATPV was greater than or equal to the actual incident energy level in an arc flash accident.

The introduction of ELIM creates a dilemma for the duty holder when determining the arc flash protection and how to match the site calculated data. For instance, the IEEE 1584 Guide for Performing Arc Flash Calculations will produce an arc flash boundary which is the distance from a prospective arc source at which the incident energy is calculated to be 1.2 cal/cm2. This is the boundary, outside which, no FR PPE is required according to US and Canadian consensus standards. In addition, working on any equipment where the incident energy level was calculated to be less than 1.2 cal/cm2 at the working distance would not require FR PPE. Theoretically, there could be a 50% chance of a burn at both these distances where the incident energy level was 1.2cal/cm2. These are the various options that the duty holder could adopt to accommodate ELIM principles.

When tested according to the open arc test, the protective clothing made of the tested material has to have an arc rating as described below in order to meet with the requirements of IEC 61482-2:2018 - Live working protective clothing against the thermal hazards of an electric arc.

Arc Rating is the numerical value attributed to a product, that describes its protective performance when tested in accordance with the open arc test. The arc rating can be the arc thermal performance value (ATPV), the breakopen threshold energy (EBT) or the incident energy limit (ELIM). A manufacturer may assign a lower arc rating value to a material or protective clothing than the value resulting from testing.

Due to the limitations of test apparatus at very high energy arcs, no arc rating above 4186 kJ/m2 (100 cal/cm2) shall be assigned to garments.

The box test is set up as a directed arc from a plaster box and consists of a vertical arrangement of a pair of electrodes between which the arc is ignited. See Figure 7.6. 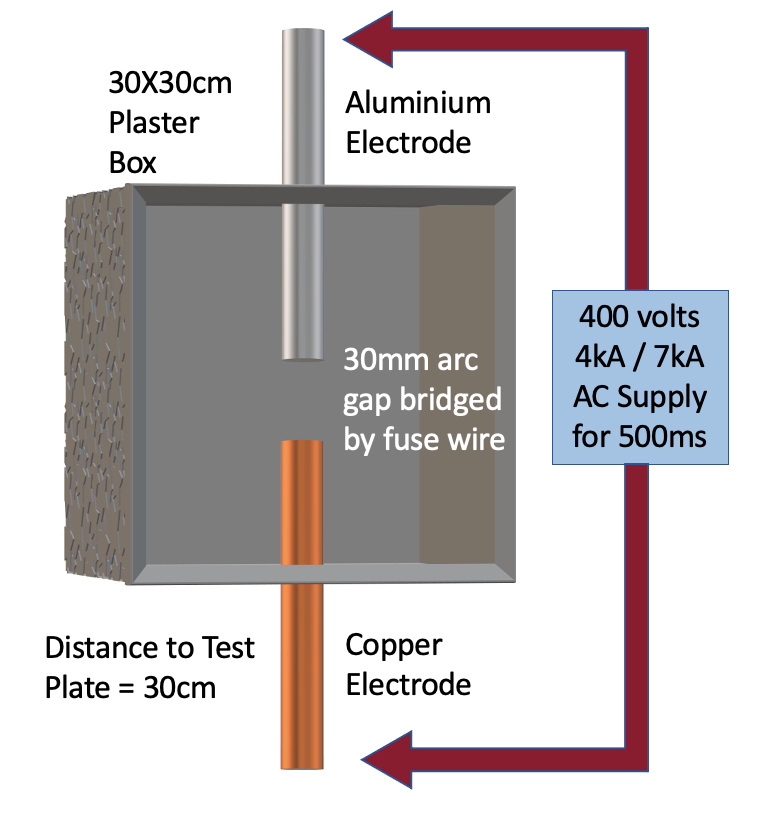 The open circuit voltage is 400 V (50 Hz) and the arc gap is fixed at 30mm, with an aluminium upper electrode and a copper lower electrode. The duration of the arc is also fixed for a period of 500ms. The arc emission is focused outwards and corresponds to extreme effects under the relevant conditions. The test takes account not only of the directed effect of heat, but also the effect of hot metal particles and splashes that accompany actual electric arc faults. The box test will test a sample of fabric up to a maximum of five samples and then a specimen of the garment. It is a very simple test not requiring decoupled power supplies and the only variability is the prospective short circuit current which is either 4 kA or 7 kA. The result is either pass or fail resulting in either thermal protection classes Arc Protection Class (APC) 1 (at 4kA) or Class 2 (at 7kA).