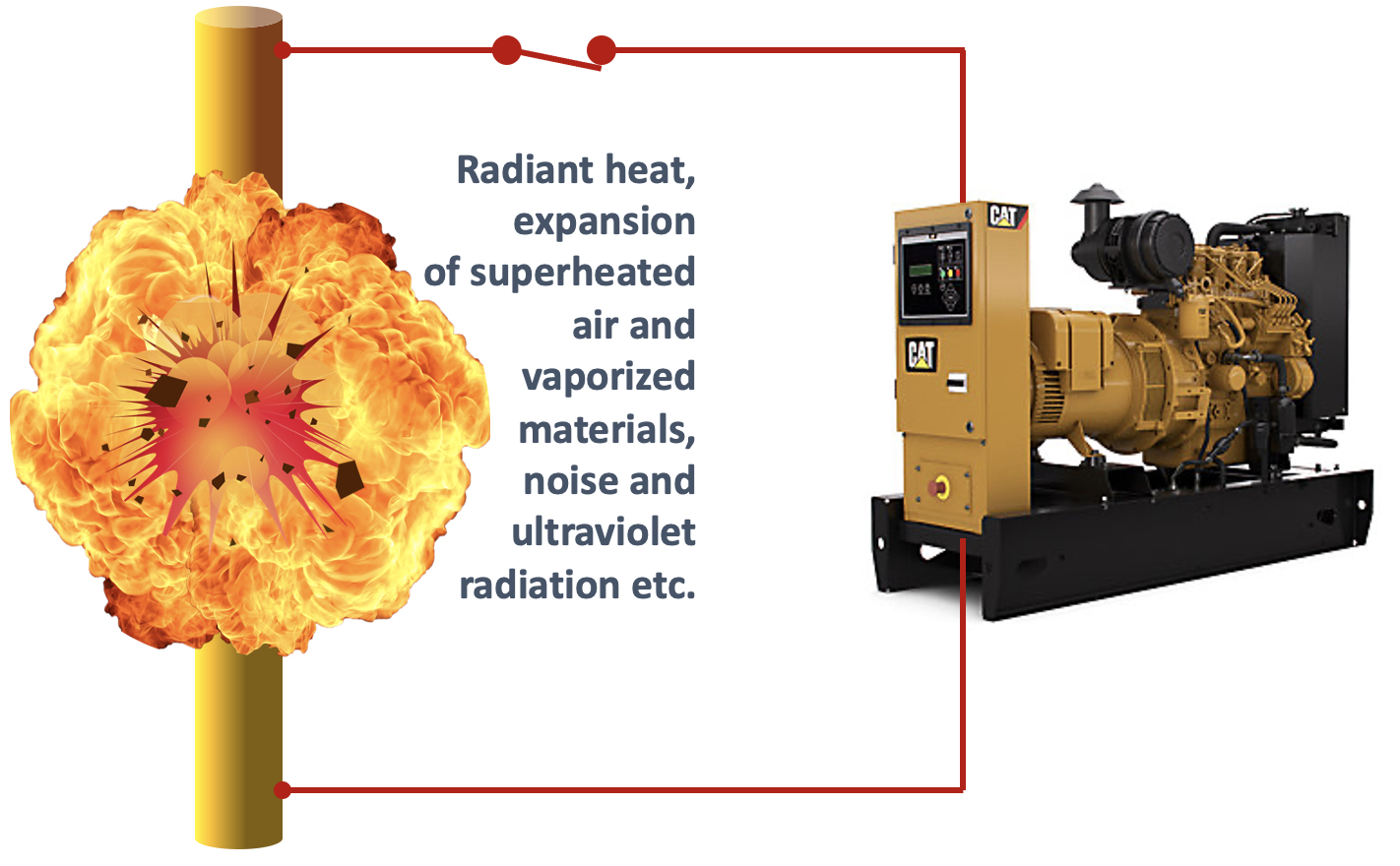 What actually happens is that the fuse wire will vaporise and in so doing so will ionise the air between the two conductors creating a low impedance path, see Figure 2.2. Large amounts of current will flow creating temperatures as high as 20,000°C at the arc which will immediately vaporise any element known to man as described previously. There will be a massive expansion of air and vaporised conductor material which causes an electrical explosion. For instance, copper will expand up to 67,000 times its original volume in a split second. The thermal effects can cause horrific burns, ultraviolet radiation which can cause arc eye and the ballistic effects can cause blunt force trauma to anyone standing close by.

The consequences of an arc flash to such a person are clearly personal injury or even death but this can also result in fines and compensation claims to companies and individuals. A damaged brand name may also be an outcome, for instance an electrical contractor being prosecuted or served notices for a matter of core competence. If the equipment is so severely damaged that it is put out of action, then this will usually counter the reason for working live on equipment in the first place, which is to keep production flowing.

In a practical situation, the distance between busbars or conductors in low voltage switchgear can be half that stated in the example given. It is easy to imagine that the arc can be initiated not by a piece of fuse wire but by dropped tools or materials or by a short circuit in an electrical test instrument.

Once we have initiated an electrical arc, how can we extinguish it? Well, either the source of energy will collapse, or there will be such damage that an electrical arc cannot be sustained or more commonly a protective device will be used which will cut off the current, preferably to limit the damage and effect of the arc. Here is where designers have a problem. We design over current protective devices at low voltage based upon available prospective short circuit current into a zero-impedance fault. Whilst the current in an arc at high voltage is almost equal to the prospective short circuit current, the three-phase fault current at low voltage is likely to be much lower than the prospective value. The arcing fault may in fact present itself as an overload rather than a dangerous short circuit which will result in a long disconnection time.

2.3 Consequences of an Electrical Arc Flash

There is evidence to show that the majority of direct arc flash incidents occur due to and with individuals in the vicinity of the arc. My own research has revealed that the majority of fatalities due to electricity are in fact from shock but that the majority of injuries in industry are due to electrical burns. I speak about incidents that have led to loss of life in this guide that I am personally aware of and also of incidents causing injury and those where no injury has been incurred. It has been my experience, that whether individuals have been injured or not, arcing incidents cause huge losses in many instances. I have categorised some of those losses as follows.

You do not need to inquire much further than a quick internet search to reveal masses of material including photographs and videos depicting horrendous arc flash injuries to individuals. Put it simply, electrical burns are horrible. They are very slow healing and leave lasting physical and mental scars.