Burns are classified differently and as the subject of a second-degree burn is used in arc flash severity evaluation, it is worth briefly describing the terms used for the sake of clarity. The mildest classification is the first degree burn also called a superficial epidermal burn. The epidermis is the only skin which is affected and there may be reddening and slight swelling but no blisters. The next is a second degree burn or a partial thickness burn which affects the second layer of skin or dermis. The symptoms are as the first degree burn but blistering may occur either immediately or sometime later. Next in severity is a third degree burn also called a full thickness burn which goes through all layers of skin to subcutaneous tissue (or fat) below. A fourth-degree burn goes through all layers of tissue and affects muscles and bones. The more severe burns often result in nerve damage which means that the patient may not feel pain, but risks of life-threatening infections are a common feature depending upon how much of the body is affected.

The inhalation of toxic and superheated products of combustion are an often-overlooked consequence of arc flash. I am aware of one case where a young man was affected in this way and the damage to his lungs was so severe that he would never work again. Blindness due to ultraviolet light, thermal burns and blast is another outcome. The effects of ultraviolet light can cause cataracts to appear years later, the injuries that the apprentice forementioned in the introduction suffered temporary blindness.

I became fascinated by the correlation between electrical accidents, age and the survivability of electrical burns. You would think that with age would come wisdom and experience but for electrical accidents that does not follow. A colleague of mine used to roll his eyes when somebody would say to him that they had 25 years’ experience in the industry. He used to retort “Is that 25 years’ experience or is it 1 years’ experience repeated 25 times?” The following graph (Figure 2.3) shows the relationship between age and fatal electrical based accidents in the UK over a 12-year period up to 2008. What stands out for me is the fact that the highest fatal accident rate is between ages 40 to 54. But it does not stop there because the number of fatalities above the age of 60 has got to be out of step with the age demographic in the electrical industry in that period. 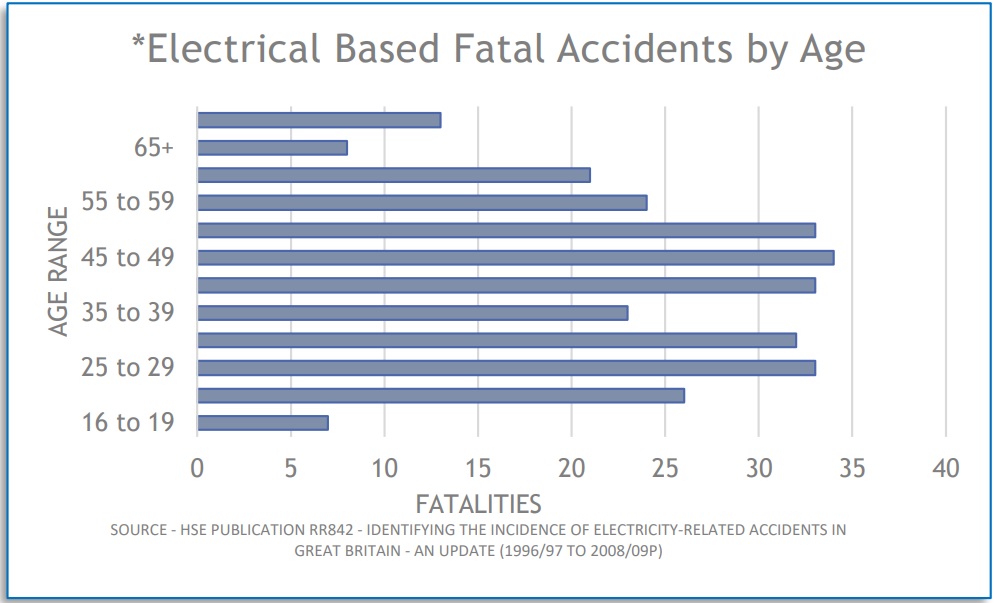 So, then we come back to the issue of age and the survivability of burns. An arc flash injury to seniors such as myself is definitely bad news. Even for those in their 50s the chances of survival have diminished fourfold from 60% down to 14% for 75% burns. There is a system called the Baux Score which looks at both factors of the percentage burn to the body and the person’s age to forecast mortality due to burns. It simply adds the percentage of the body surface burned to the patient’s age to create a score which is a prognosis indicator and a score over 140 would not be considered survivable.

Whilst the financial penalties due to fines are not always as severe and eye watering as they should be, they are becoming more noteworthy. Just recently, an electrical contractor was fined £1,000,000 plus costs for breaches of section 2(1) of the Health and Safety at Work Act 1974. This was following burns to an electrician who was undertaking routine testing. In mitigation, the contractor said that a full review of electrical safety processes and systems across its sites had since been carried out, with "actions being taken to minimise the risk of recurrence". The costs of arc flash accidents do not stop there however, and compensation claims can run into many hundreds of thousands of pounds depending upon severity.