HRC fuses can minimise the amount of energy let through at high prospective short circuit current and therefore minimise the incident energy. See Figure 5.3. Current limiting fuses can be relied upon to operate in accordance with their operating characteristic. Circuit breakers may not if poorly maintained.

A common misconception is that if fuses are current limiting, then the resultant incident energy from their use must always be lower than other overcurrent protection devices. This will only be true if the arcing current is seen by the fuse as short circuit current. As we have seen in the previous chapter, the fuse may see the arcing current as an overload and in which case the time to operate will take longer. 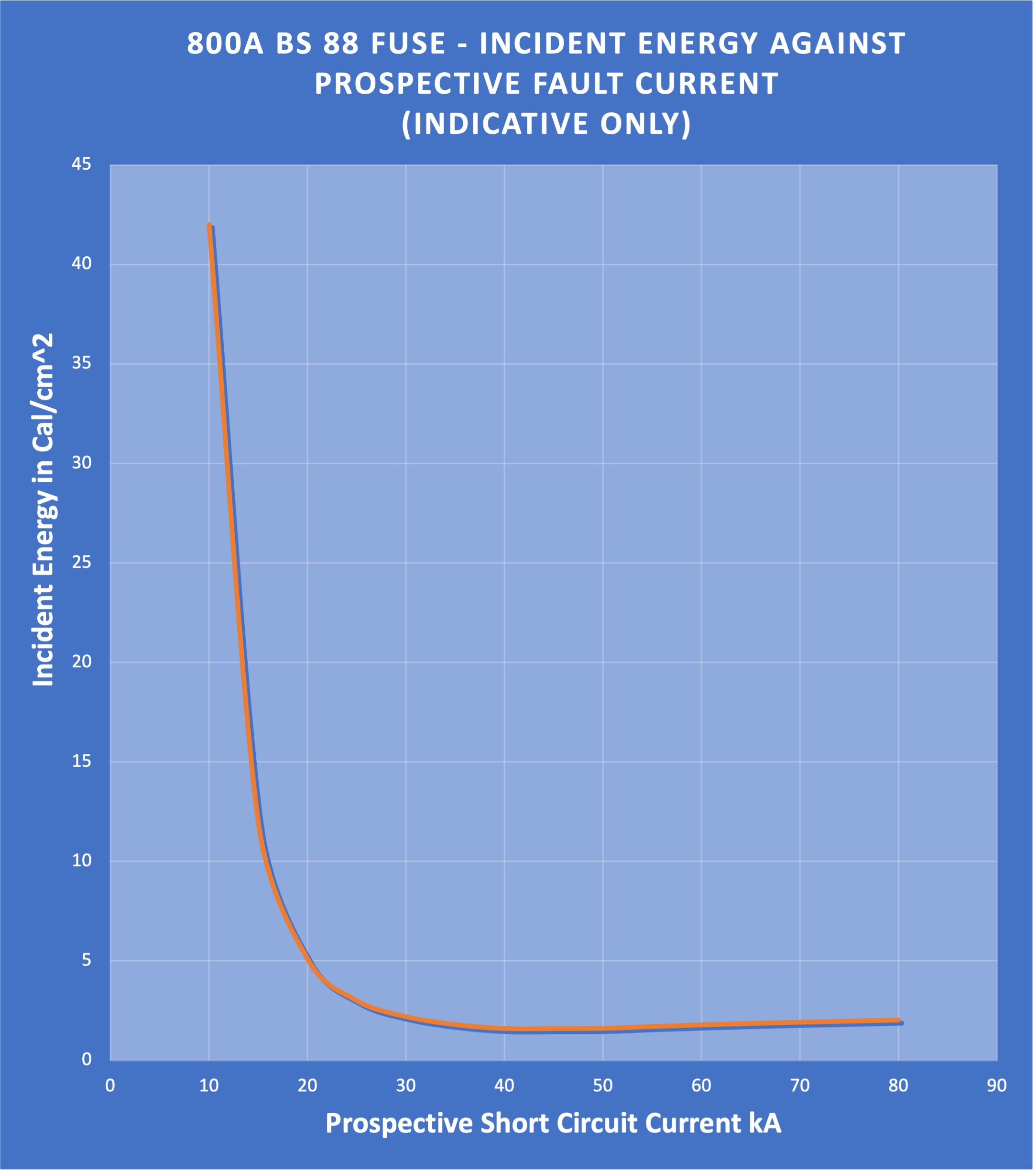 The graph in Figure 5.4 shows the indicative incident energy level for a low voltage system which is protected by an 800 ampere BS88 high rupturing capacity fuse.

Circuit Breakers. There are also current limiting circuit breakers widely available for lower ratings (up to 630 amperes). To qualify as current limiting, they must be capable of restricting the let-through I2t during a fault to no more than the I2t available during a half-cycle of prospective symmetrical short-circuit current. This can be shown graphically in figure 5.5. 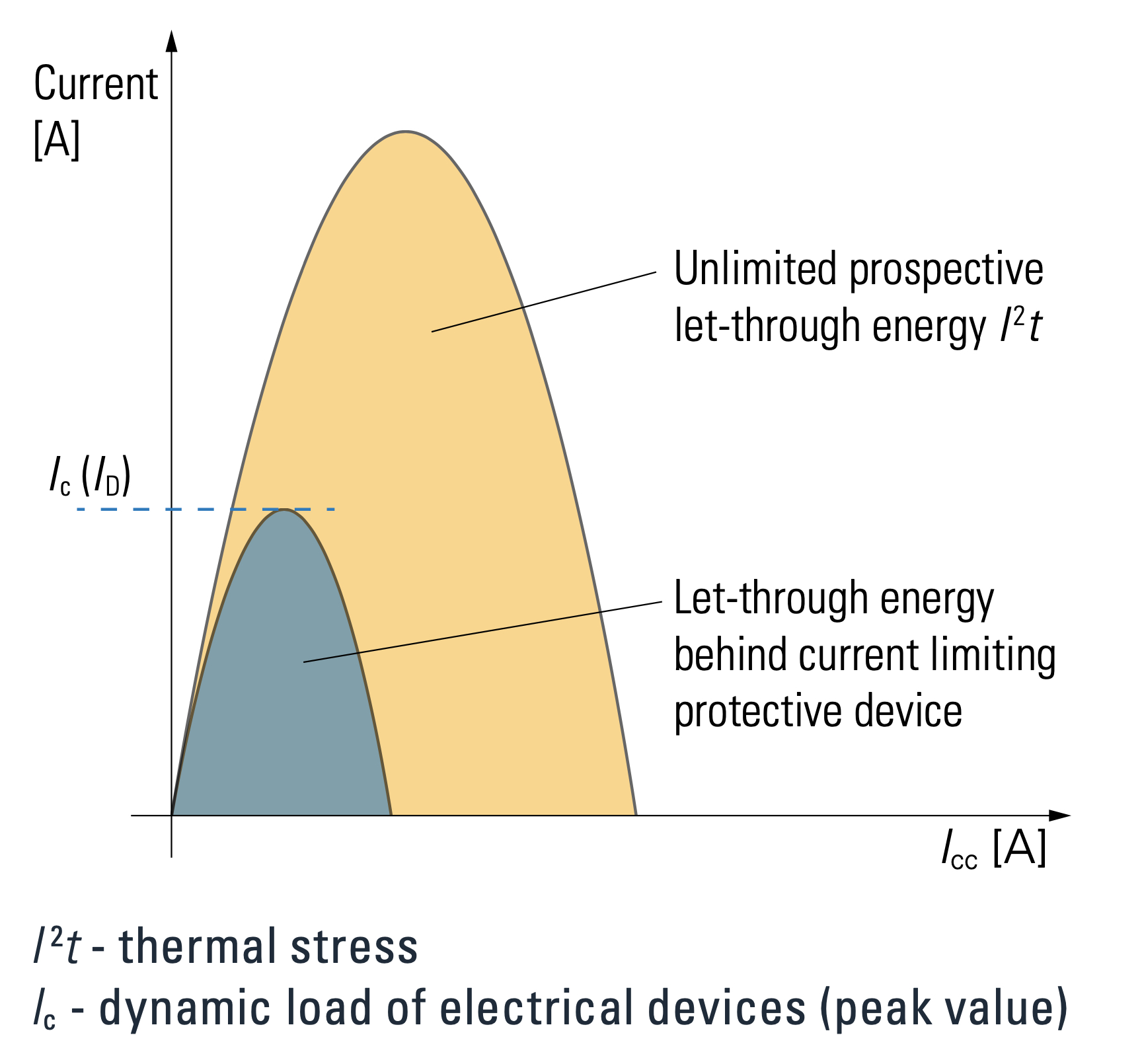 Fuses versus circuit breakers. This is one of those debates that exercises the minds of electrical design engineers. Experience shows that preferences are often not based upon sound principles. When it comes to arc flash, there are examples in this guide of where the use of each type of protection may have been a contributory factor in an electrical flashover accident. The first example is in my introduction. I spoke about my experience as a witness for the prosecution against an electrician who had failed to isolate an electrical system prior to his apprentice carrying out work which resulted in him being injured in an arc flash incident. The point of isolation was a 200-ampere moulded case circuit breaker which had opened but the red phase contacts were welded closed due to the earlier fault condition. Therefore, it is a misconception that circuit breakers will always faithfully open all poles of supply whatever type of fault condition. Clearly, the accident could have been avoided by implementing a proper isolation process.

The second example of a contributory factor to an arc flash accident concerned with protection arrangements is apparent in the example that I write about in Chapter 12: Myths and Mistakes (Live Working on Damaged Equipment) In that case it was attributable to the use of fuses. Whilst the fuse carrier and mono block isolator were damaged by an electrician due to negligence, it may serve to highlight that changing large fuses does require a degree of skill and care.

Having opened the debate about fuses versus circuit breakers the following are commonly understood advantages and disadvantages. Fuses are relatively low cost, simple and very reliable in respect of operation, maintenance free and can interrupt high short circuit current with minimal noise or combustion products. In addition, current limiting fuses are available in sizes greater than current limiting circuit breakers. On the other hand, circuit breakers take less time to restore power, where they can be reset following an overload condition and are generally easier to discriminate between upstream and downstream devices. In respect of arc flash protection, circuit breakers give flexibility in that they may have auxiliary devices connected such as arc flash detection and have maintenance settings applied. However, fuses can be relied upon to operate beneath their time current characteristic curve for arcing short circuits whereas poorly maintained circuit breakers may not. Protection arrangements are always a compromise between overload and short circuits, the equipment being protected and coordination requirements. As a result, both fuses and circuit breakers will commonly be used in the same electrical distribution system.